A fascinating guided tour around Spitalfields and Shoreditch. June 2019

Would you believe this is the upper Wandle, near Croydon?! Discovered by walking club on Thursday.  1st June 2019 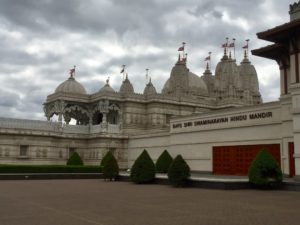 A fascinating visit to the BAPS Shri Swaminarayan Hindu Mandir (The Neasden Temple) – a beautiful piece of India in NW London. June 2019 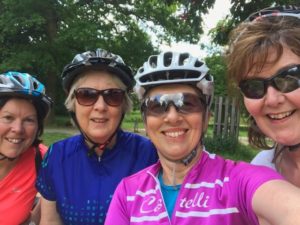 Four keen and stylish members of cycle club. They must have had helmet hair afterwards, though! June 2019 Ceilidh (Scottish Dancing) at our branch meeting May 2019 February 2013
A chance to get to know each other  at our first ‘speed dating’ event !

The hall looked fantastic and the food and drink tasted wonderful.  The entertainment was great and much chatter, singing and flag waving took place.

Yes, there is a dog under there somewhere!

The Light Cafe in Wimbledon Village looked after us very well – and apologies for being so noisy!

The stall looked beautiful – even if the heavens kept opening and drenching us with rain!  Thank you to everyone who bought our produce and helped us raise money for Women’s Aid.

SW19 WI members hard at work making chutney and flavoured oils for the Wimbledon Village Fair….with a bit of help from Matthew – a chef and husband of one of our members

Knit and Stitch Club members prove that they don’t just sit round and drink tea and chat – though they do quite a bit of that as well!

This may be the Gardening Club, but SW19 WI women always look glamorous

At the Craft Event, members made some fantastic fabric covered memo boards

No-one knew that a session on Nordic Walking was going to turn into an exercise class!

The Club’s first walk was held on Wimbledon Common.  A few intrepid members braved the snow…

Role of President – Lorna will be stepping down as President at the November Annual Meeting 2022.  Please contact her for details of what is involved.

If you are interested in coming along to our monthly meetings and joining the SW19WI, we would love to meet you.

No meeting in August.